Blockchain might render you Jobless or out of Business

The buzz lately is about Bitcoin and cryptocurrency trading. People are trying to figure out how to make a killing from the volatile appreciation of Bitcoins whose price hit US$ 20,000 a while back. Some governments are fighting cryptocurrencies while others have adopted the wait and see approach. Top business leaders have come out to make comments in support of or against Bitcoin.

The advent of Blockchain has redefined technology and it will likely take a couple of years before its massive impact is felt. Blockchain is a technology that replaces the middleman when it comes to transactions through the use of direct peer to peer interactions.

We have big businesses and prominent professions that have been curved out to purely act as middlemen between producers and consumers. The financial industry is littered with banks whose primary role is to enable Person A pay Person B or aggregate money from multiple depositors and lend it out to the borrowing few. In the process, they get a commission.

If you take the example of an international money transaction where an individual in Uganda is paying a supplier in China for some goods. This individual will initiate a transfer through his bank and the intermediaries are; the Ugandan’s local bank, a correspondent bank, an international clearing house, another correspondent bank and finally the Chinese supplier’s local bank. Each of these intermediaries slaps a financial surcharge on the transaction. Time is another factor that features prominently in these transactions, taking between two and four days before maturing.

This is a classic case of middlemen creating a higher burden of transacting. The effect of Bitcoin is to erase the necessity of middlemen between producers and consumers by replacing them with peer to peer systems. The infographic below illustrates this. 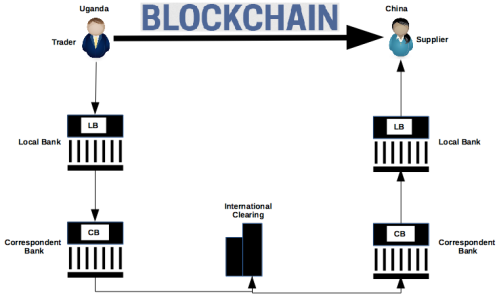 Apart from the financial industry, some of the industries likely to be grossly impacted by Blockchain include the Real Estate, Insurance, Global Logistics and Shipping, Advertising and Crowdfunding.

In Uganda, if you are in need of purchasing land or renting a house, you have to engage brokers who identify the various plots of land ready for sale by their owners, pay a site visit, establish the land ownership, haggle over the price and then upon agreement, pay up before transfer of the title is effected.

Often times, there are loopholes in this process, like;

Enter blockchain and its ledger approach that clearly chronicles all transaction changes of a system without giving room for illicit alterations. Software based solutions can now be developed to address the loopholes as well as ease the customer experience in this real estate sector.

Property listings can be made available on a blockchain enabled system that allows users to upload information of their property like the physical address, ownership, title information, selling or rental price among others.

The same blockchain enabled system could act as a storage of information on ownership status and history. This would then quickly allow an interested party to identify the true ownership status of the property as well as a history of transactions. Any encumbrances on the property can also be revealed at this point. Currently, this process is largely paper based and time consuming. One is expected to physically visit the Lands office, submit a request, make payments in a bank and then wait for the officials to carry out the manual search.

When it comes to agreements, Blockchain supports Smart Contracts. These are self executing contracts with the terms of the agreement between buyer and seller being directly written in the programmed software. They permit trusted transactions and agreements to be carried out among anonymous parties without the need for a lawyer. They also render the transactions traceable, transparent and irreversible.

I was once involved in a land transaction where I was given the land title for verification with the lands office, a process that took a couple of days before I could revert to the seller. During that time, he got so scared and thought that I had duped him. My delay was largely caused by the various individuals we had to go through to confirm the title ownership. All these manual steps can be circumvented by blockchain enabled systems.

In this real estate example, it is evident that land brokers, search agents and lawyers are likely to be edged out if they do not find ways of redefining their roles.

In the financial sector, money transfer agents and forex bureau operators are likely to be heavily affected.

I advise you to study your profession, see how you can take advantage of the emerging Blockchain technology and begin riding the wave before everyone else. Blockchain is the future, just like the World Wide Web was correctly predicted as the future towards the end of the last century. If you hope to remain relevant as a business or a professional, it’s time to reposition yourself.

Don’t be fooled by cryptocurrency trading because it is just a niche area displaying the massive potential of the Blockchain technology. There are a lot more opportunities yet to be unearthed. Like the Basoga say, Wakatolera (It’s just beginning).

James Wire is a Small Business and Technology Consultant