Two years ago I took keen interest in Astronomy and even went ahead to purchase a telescope just to fulfill my dream of being a self taught astronomer. However, it’s until I joined a WhatsApp group of Astronomers that I begun walking the talk. In the process, I have learnt a lot and one of the most peculiar things I have found about our universe is the Black Holes.

A black hole is a place in space where gravity pulls so much that even particles and light can not get out. As you may recall, gravity is the force that attracts one body towards another that has mass, akin to what makes us always naturally stay on the ground as opposed to floating all over the place.

Illustration of a Blackhole

Due to the intense gravitational force that blackholes have, whatever criss crosses their path is always devoured, unless of course if it can travel at a speed faster than light. It’s the reason they have earned themselves the name Cosmic Cannibals.They devour whatever they come across since theoretically, nothing can move faster than the speed of light.

Wondering what this lecture on Astronomy has to do with MTN Uganda? Well, read on.

As an avid internet user, I was one of those that enthusiastically embraced the advent of the Night Shift Data packages that were pioneered by the then Orange Telecom (Now Africell). When MTN Uganda introduced a similar package, I simply came on board since I always needed a backup in case one provider misbehaved.

What is Night Shift? This is a data bundle package that gives you 1GB data access to the internet between Midnight and 6am daily on the MTN network.

As a night shift user, you re expected to start operating from Midnight of any given day until 6am in the morning of that same day. This offer is very lucrative especially for the data greedy guys like me. At the cost of less than a dollar, I find it one of the best deals that give me a great opportunity to utilise my weekend night time within the confines of my home.

In the course of it’s usage, I usually finished my data package by 4am but when I started off going all the way till 6am, a worrying trend begun surfacing. Somehow after 5am, connectivity begun to get interrupted and for a while I blamed myself and my gadgets. Then I once heard from someone else complaining about a similar experience I was all too familiar with. That is when I decided to call up my skills as an ISP techie. At least I knew how to traceroute, ping, nslookup (made obsolete by dig) as well as sniff and decode traffic in Hex.

On the 6th of September 2015, while following up with MTN on the case of a user who had experienced a shock after the Night Shift service apparently ‘expired’, I received a report from MTN indicating the usage which revealed that she had used 332.844 Mbs and had a balance of 667.156 Mbs at the time of expiry. This got me fired up to verify whether it was a one off problem or a consistent con unknown to MTN customers.

I tested for a couple of nights and my findings were as follows;

MTN Uganda for sure is aware that for the average consumer, they will believe all they see and consider that the problem is on their part. Calling customer care, you are belittled by their kind of patronising language that brands you guilty until proven innocent. I once had to do the unusual and arrogantly assure one of the wannabe techies that I’ve been there done that when it comes to Internet Systems while he was still getting padded in diapers.

The Screenshots that follow attest to the extensive work I did to follow up the issue with MTN Uganda.

The anger levels were way up there.

Feeling helpless, I resigned to giving them a piece of my mind. 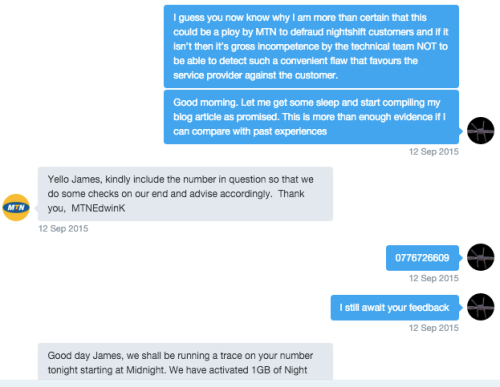 After the promise they made on the 12th of September 2015 to follow up, I received no response until I prompted them on the 4th of October 2015.

In this message, MTN admitted that they do have a problem. It therefore came as a shocker to me when I saw a recent post by a fellow tweep complaining about a silimar issue and I was CCed in the ensuing fray.

I then chose to remind MTN of their unfulfilled promise and they shocked me with the response below. 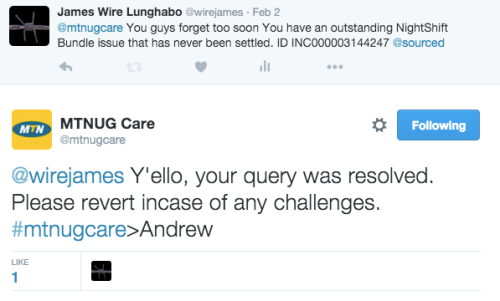 To be honest, either people think along parallel lines at MTN or there is someone very incompetent who seems to be content with mediocrity. This is when the likes of Mr. Eric Van Veen are greatly missed.

Now these are direct questions I have to MTN UGanda;

Whatever that #DataBlackHole is at MTN Uganda, it’s definitely not a Stellar Mass Black Hole but a Super Massive Black Hole that makes a joke of the one at the center of our Milky Way Galaxy. As for now, I want to warn any MTN Night Shift customer to desist from using the service beyond 5am as you will risk entering the Event Horizon of that blackhole. Use up your data bundle before that time to avoid being cheated.

Over to you MTN Uganda

If you have been a victim of this, contact me with your details so I can prepare a protest letter to the Uganda Communications Commission on this issue.