Hon. Minister Sir, This is what I wanted to say

In Uganda, it is out of the ordinary for a Government minister to engage the citizenry in a consultative manner. In most cases it is a one way engagement where he/she is telling the citizens what to or not to do. This is why I was taken aback when I received the call inviting me to the ICT & Communications Stakeholders’ dialogue convened by the Ministry of ICT and National Guidance that took place on the 7th of July 2016.

That morning, I decided to pen down issues I thought I needed to share but midway my attempt, the little devil in me reminded me that it was going to be business as usual hence I might not even get a chance to air my views. I proceeded to send some Whatsapp messages to my Wawa buddy Simon Kaheru. 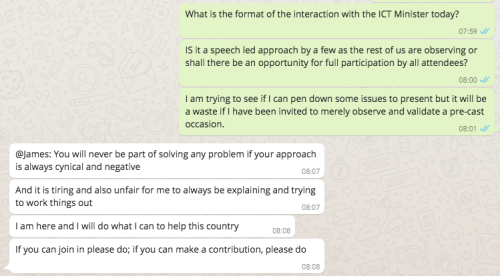 As you can see, he lambasted me for being negative and that is when I realised that just maybe, this is likely to be Business Unusual this time round. Given two minutes to make my submission, I realised that I had a herculean task and hence had to summarise in a manner that would make the creators of WinZip envy me.

Hon. Frank Tumwebaze, this is what I had to share after being fervently reminded that it was a dialogue NOT a finger pointing and popularity seeking contest.

Uganda may have made strides in the ICT sector over the years but like any other industry, we are always on the road, seeking moving on to the next best thing. As a result, my views on the industry currently while not exhausted by this submission are;

Get the National Fibre Backbone closer to the people. The National Data Backbone rollout by government is an impressive feat and should be applauded. Despite the hiccups faced in it’s initial stages, the team at The National IT Authority, Uganda (NITA-U) was able to turn around a nearly failing project into the deployment success it currently is. Steps were taken to have a private sector company manage it’s commercialisation but to-date, we are yet to see and feel it’s effect directly as citizens. While it may be interconnecting some critical government infrastructure that we rely on already, as well as offering capacity to some large corporates, as a resident of a village in Mukono Town Council, I would like to see it impact me directly. Short of working out ways in which we can see real value as lay men, it will remain a white elephant to us.

Case in point, Smile Telecom and Roke Telekom have some pretty decent internet access offers, however, because they have to roll out their networks from scratch as they extend the services from town to town, this has slowed their growth. Why can’t we win over some of these providers to use this backbone as a backhaul thereby allowing them to concentrate on final delivery of services in the various towns? The argument might come up that “They haven’t approached us” or “we failed to agree” but this is not the attitude of a proactive mindset. It always helps to engage and find out what middle ground one could achieve. So, the company contracted to manage this fibre needs to offer more services than merely maintaining the proper functionality of the cable. It should be able to advise the government on how to better utilise the resource, attract more customers through well packaged incentives.

By offering good backhaul links between the towns, this fibre has the potential to create a spinout of numerous Virtual Service Providers who can effectively offer services in their local areas and hence widen the catchment area of internet and e-government usage in this country. Imagine if the fibre has a termination point in Kumi and a one Ejalu sets up a local WiFi network in Kumi town with backhaul access to Roke Telekom in Kampala via the National fibre, he can provide not only a much cheaper service than the grossly expensive bundles that our Telecoms have made us accustomed to but also has the opportunity to customise its delivery through the use of open source software as well as language translations to suit the locals. The future of most services is localisation.

Certification of ICT Practitioners. NITA-U has come up with a proposal to regulate all ICT practitioners in the country just like is done in the Legal, Engineering and Surveying sectors. This is being met with alot of resistance from industry players.

However, in my personal opinion, this resentment is probably as a result of uncalled for Fear, Uncertainty and Doubt (FUD). The government needs to come out and sensitise the affected parties about the intentions of this initiative as well as make modifications where necessary.

The ICT industry is not as straight jacket as the Legal, Architectural, Survey and Engineering domains that are pre-defined out of the box. Many, including yours truly are self trained practitioners who spent sleepless nights utilising internet resources to gain skills. To be told that you need to have a certain certificate before being allowed to offer an IT service is a threat to our very existence. However, more of this is covered in this article I wrote on the need for certification.

Outsourcing. Through NITA-U, the government has made efforts to promote this sector of ICT Business. Truth be told, not much has been achieved and this could be attributed to the misguided belief that business opportunities will come from outside the country as opposed from within.

The Indian BPO industry honed its skills from the pro-active approach taken by the government to outsource services for some of their work to local businesses right from the local government level up to the national. A similar approach would help our companies too.

It is no secret that most government departments in Uganda need digitisation of their records. Secondly, there are numerous citizen centered services that the BPO sector could run on behalf of Government agencies e.g. The immigration department could have a tracking system for Passport management run by a private company to respond to various passport related queries instead of the massive human traffic that makes daily pilgrimages to their offices giving a semblance of a busy environment.

The Uganda Revenue Authority had a similar problem when it used to centrally manage all lodging of paperwork by clearing agents and various tax payers until they came up with an IT solution that allowed third party service providers to plug into the system and offer the same services. The traffic at their head office reduced very significantly.

Local Content. Local Content refers to the percentage of locally produced materials, personnel, financing, goods and services rendered to an industry and which can be measured in monetary terms.

Just like the Oil Industry, it is high time a local content policy for the ICT industry in Uganda was effected. I know NITA-U is working on this but it’s important that we bring it to the fore. During the run up to the previous elections, the discontent by many arose from the fact that most opportunities in the country are seen to be bypassing the local providers in preference for foreign. With all ‘big’ jobs naturally gravitating to foreign owned companies, this has left many brilliant ICT professionals with nothing to do locally as well as led to the closure of many a business venture.

Take a stroll around Africa and you will be amazed at the number of projects Ugandan ICT professionals have implemented. During a consulting gig for the Common Market for Eastern and Southern Africa (COMESA), I felt very proud when the head of the ICT department praised the Ugandan consultants they had used claiming they always did a great job. Why then can’t these very resourceful Ugandans be appreciated back home in preference for foreign journeymen way past their sell by date in their home countries? Yesterday, a friend intimated to me that a reknowned financial institution in Uganda flew in expatriates to install a Cat6 Cable Network in their offices. It is such instances that make me resort to Tamale Mirundi’s expletives “Ngalabi Za Mitwe” (Drum heads).

The cry by Government officials that we are not yet skilled enough is hogwash because we would not be hired by international agencies if that was the case.

I propose that an inventory be done of ICT practitioners in this nation complete with their areas of specialisation and businesses (if any). A move towards empowering them either through selective bidding (locking out foreign entities) or ensuring a procurement structure that enforces partnership of foreign entities with local businesses in order to undertake projects would be welcome. We need to start sieving the deal makers from the real solution providers and this is where accreditation through certification might come in handy.

National ICT Strategy. It is said that one human year equals four technology years. In other-words, every three months that elapse equal to one technology year. As a nation we are good at making plans, policies and the like, however, in some cases these are driven by the need to achieve simplistic quick gains without looking at the long haul.

We also tend to have a disease of implementation. When the good plans are made, either the resources (not only money) required to see them through are not availed or government departments attempt to outmuscle one another for implementation rights.

What we need is a well rounded strategy with a multi-disciplinary and long term perspective. ICT is an enabler, so any plans should take into consideration our aspirations in the Health, Education, Agriculture, Manufacturing, Transport, Tourism and other sectors. How can we can use ICT to address corruption, traffic jams, trade, manufacturing, illiteracy, security, travel, piracy, climate change among others. The desire for shortcuts will keep us heading back and forth in an unending loop only to take us back to the starting point.

Hon. Minister Sir, this is what I never had a chance to share in detail. I am glad you have read it in it’s entirety now. By the way, you asked where the developer of Me2U is. I would like to gladly tell you that he is very alive and plying his trade from Entebbe with a largely foreign clientele that keeps him busy. Not wanting to soil his career with the intricate dynamics involved in getting local business (especially government), he opted for the foreign strategy. Otherwise he is one of the most deeply rooted nationalists I know of in this country.

For God and My Country

This entry was posted in ICT and tagged ICT, James Wire, nita-u, Uganda. Bookmark the permalink.

One response to “Hon. Minister Sir, This is what I wanted to say”