All through his primary school studies, the young man had his eyes on Kings College Budo (herein referred to as Budo) as his school of choice for secondary education. His parents always reminded him that the only obstacle between him and Budo was obtaining Aggregate 4 in his Primary Leaving Examinations. He promised himself to get those grades and read like his whole world depended on it.

When the results came out, like the adage says, hard work pays, he had the required aggregate 4 to enter Budo as a star pupil. Celebrations ensued at his home with relatives, friends and neighbours congratulating him. His gait even changed to one befitting a Budonian (we all know how they be). After the school selections hat taken place, the young man wasn’t considered for a place at his most highly coveted school. 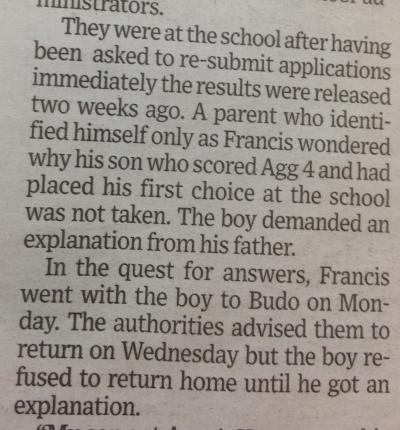 This led him to stage a campaign of defiance that has seen him refuse to leave the confines of Budo until he’s given a satisfactory reason why he wasn’t admitted.

Pupils at Buganda Road Primary School studying hard to join the much coveted traditional secondary schools like Budo, SMACK, Gayaza among others.

Reading that story in the Daily Monitor brought tears to my eyes. This is yet another injustice being meted upon the powerless. Having been born in a modest family without the trappings of political or economic power, the young man is being denied what is rightfully his. As anger welled up inside me, I recalled myself exactly thirty years ago, having passed with similar grades, I had chosen St Mary’s College Kisubi (SMACK) as my first choice and without any underhand dealings, was duly selected to join the school. What is it that has changed between then and now?

Towards the end of the academic year, many school head teachers in the so called big name Church, Government and Private schools rub their palms with glee as they fathom the upcoming windfall of money that is likely to exchange hands as parents venture as far as the moon to ensure their children join these highly coveted schools. In an earlier post on this issue, I indicated how the few available places in some of these schools are already over subscribed by allocations dedicated to various interest groups. Let’s take Kings College Budo as an example, the interest groups I know of are; Church of Uganda, Buganda Kingdom, State House, Ministry of Education and the Old Students Association. Their lists of students are the first to be approved even before considering the genuine cases of high achievers. This is what must have led to the scenario of that young man.

As a result, Budo and schools of its kind have become hotspots for those with technical-know-who as well as the moneyed elite. Budo is what it is because of the one hundred plus years it has been around churning out highly brilliant merit laden students who have gone ahead to change this nation and the world we live in. By going against the ethos that has seen them select students on merit, they are merrily digging their own grave, albeit in the manner of a slow killing poison. I keep hearing some pedestrian commentators trying to chest thump asking where students of the lesser known schools are and which sectors of the economy they are managing but my assurance to you is that most of these lesser known schools are hardly two decades old and their graduates are probably at best 38 – 40 years old. Using the law of probabilities, one might need to wait another couple of years before you see them swamp the economy. Their numbers are growing slowly but surely.

Back to Budo, with all this injustice they are meting upon brilliant students in order to please the selfish desires of a few who do not care about the school’s long term survival, I guarantee you the grave being dug will definitel be more than six feet. An analysis of the overall performance of schools nationwide reveals that those in Western Uganda are catching up very fast and shall definitely overtake the traditional Central Uganda big guns within the next five to eight years. They are achieving this by concentrating on the core issues while taking advantage of not being under pressure. Take time and ask State House, Church of Uganda and the Ministry of Education how many lists they send to schools like Ntare in Western Uganda and you’ll be hard pressed to find any worth talking about. That very Ntare is however one of the leading schools today according to the metrics in place. Don’t you really think there is a sinister plot to swamp the school with more students than it can handle, hence leading to a poorer learning environment which eventually yields half baked graduates? Think about it.

Another trait of bad manners these high sounding traditional schools have come up with is financially burdening parents. Look at the case of SMACK that is requesting for UGX 500,000/= as Special Development Fees to each Senior One student joining on top of an already hefty school fees sum of UGX 1,900,000/=.

How is a low income parent expected to cope with such?

In Gayaza High School(Gayaza), a generator maintenance surcharge is required and a quick count indicates that the school can afford to buy a brand new generator each term at this rate. When will all this nonsense stop? Have parents been turned into cash cows? Should poor or modest family heads be made to slave away just to maintain a child in Gayaza?

The era of training 21st century students with a 20th century mindset has to cease. I am a proud old student of SMACK but one thing I can admit is that the prioritisation of quantity over quality has put me off totally to the extent that I wouldn’t recommend anyone with a radical mindset like mine to take their child to those traditional big guns. It is time they rethought their strategy otherwise today’s perceived minnows will eclipse them tomorrow when their products excel where it matters, THE WORK PLACE.

Are you a parent? Remember, it’s your actions among other factors that are greatly contributing to this nonsense going on in our schools. If you and me say NO to bribing for places, NO to seeking special consideration, NO to depriving legitimate qualified candidates a place, NO to paying incomprehensible extra fees, NO to grilling our children merely to pass exams, NO to high teacher to student ratios, then we shall have begun our journey of making Uganda’s education system great again. Let’s fight from within.

To the student and parent that have staged a sit down strike at Kings College Buddo, thank you for that stand of defiance. I’m with you 100%. You’ve kindled the light that just might lead to a tsunami whose wake of destruction might actually save our schools from heading into oblivion.

To the likes of Budo, SMACK, Gayaza, Namagunga, Namilyango among others, I may be that fly today, irritating you with my dooms day talk but take it from me, if you don’t wake up, a decade from now, you’ll be history. It’s because I pride in your continued existence that I have taken time off to share my observations.

A blog reader who prefers to remain anonymous did contribute this article titled “Is Uganda’s Education System going to the dogs?” Read on, interesting analysis they’ve got.