From Subsistence to Commercial Farming. Smallholder farmers at crossroads

Muniru, a rice farmer from Leresi in Butaleja district has been growing rice for over fifteen years. He however doesn’t know why he’s still a poor man. His story was no different from that of other farmers I met during a Rice Value Addition training organised by The Pearl Foundation for Children and Widows supported by the Skills Development Facility (SDF), a project under the Private Sector Foundation of Uganda (PSFU).

As urban elites, we tend to have a lot of theories on how to transform our largely peasant dominated small holder farming population into a more prosperous one. Unfortunately, until we get to understand the psychology of these farmers, we shall keep shooting off target with our noble but poorly thought out solutions. 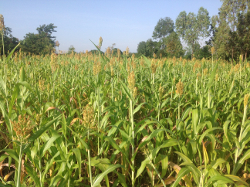 Over the past twenty years, the ever growing urbanisation and industrialisation has led to a vast increase in the demand for all types of crops including those that were never considered cash crops three decades ago. Produce like cassava, simsim, soya beans, millet, groundnuts and rice are now leading cash crops for most farmers.

Among the over one hundred farmers I had a chance to train in this PSFU initiative, all of them confessed to selling off at least 85% of their produce. This got me to realise that these farmers are actively delving into commercial farming.

If they are earning money, why then do they still lament about poverty?

My overall conclusion was that, these small holder farmers are approaching commercial farming with a subsistence mindset.

Their subsistence mindset is betrayed by the fact that;

While I do applaud their move towards commercial farming, I have a lot of discomfort about the way they have chosen to approach it. Many of the mistakes currently being made are borne out of ignorance about commercial farming as well as third party forces like manipulation by the middlemen, poor mobilisation by the local leaders among others.

Any commercial engagement is usually premised on some of the following tenets;

It’s the lack of knowledge about the foundational requirements of commercial farming that seems to be one of the biggest letdown for these smallholder farmers. 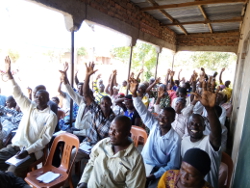 These farmers are not fools nor are they resistant to change, they simply do not know better. They exhibit a high affinity for acquiring new knowledge, and this should be closely followed up with implementation support. 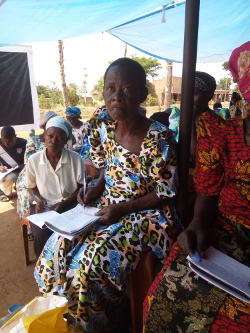 The elderly study too

Old and young, these farmers will surprise you by their openness to new ways of doing things. I found farmers who were simply comfortable with the way they grew and sold their rice under the belief that there was no better way.

Following a well structured training that traversed the entire process from seed selection through the transplanting process, to weeding, harvesting and eventually produce sale, they were able to identify numerous ways of improving their product offering. 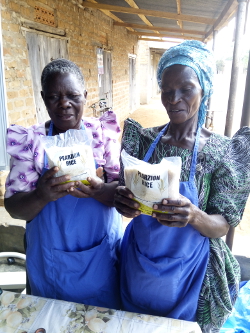 Packaged rice by the farmers

Farmers that had always been content with selling stone filled broken rice to traders at the mills are now empowered both skills wise and psychologically to add value to their produce upto the level of branding and packaging ready for the eventual consumer.

Using this experience, I now realise that efforts aimed at improving farmer livelihoods especially under the various wealth creation programs that we are bombarded with need a shake up.

An approach that does not focus on merely availing free inputs to farmers but goes ahead to integrate tailored trainings and mindset change is likely to deliver much better results.

Right now, my challenge has graduated from making these farmers appreciate value addition of their rice produce to seeking out urban markets for their high quality graded rice.

Thanks to the World Bank funded PSFU project, I have had a chance to contribute to the betterment of farmer livelihoods through this Pearl Foundation for Children and Widows initiative.

James Wire is a Small Business and Technology Consultant

7 responses to “From Subsistence to Commercial Farming. Smallholder farmers at crossroads”