The pain of getting a National ID in Uganda

Sometime in October 2018, after months of pondering what next to do having misplaced my Identity card, I gathered the guts to embark on the process of applying for a replacement.

The first time I went to the Kololo Airstrip offices of the National Identification and Registration Authority (NIRA), I reached at 10 am and found a sea of humans waiting to be served. Definitely, I couldn’t stay long due to work commitments. Someone advised that I try reporting by 6am so as to be among the first in the line.

Two days later, I arrived by 6am hoping to lead the pack, only to find over 50 people present. I immediately abandoned and chose to plan for a 5am arrival the following week. This time round, I happened to be the second to arrive. Sitting it out in the cold with my school going kids in tow was such an agonising experience. The boda boda rider I had made plans with to pick the kids arrived at the agreed time of 6:30am and took them to school, thereby relieving me of that burden.

By 7am, the numbers of waiting people had swelled to over 150 and we still had another hour or so before the action begun. Fast forward, it’s 9am and my paperwork has been crosschecked and submitted to the next level. I am then told to head to the photography and finger printing section.

The staff in this photography section have a culture that leaves one agape. They stroll around with airs like royals who have a lot of time to do nothing. They give you the do not disturb me attitude of a Queen ant. Chit chatting among themselves as well as WhatsApping while giggling away like adolescents is the norm. They appear aloof about the swelling numbers of applicants to attend to. Their official language is no where near English even when they know they are serving Ugandans. A lady will look at you with a face of disgust like you asked her for “some” and she doesn’t want. The guys are openly wheeler dealers busy liaising with brokers who are paid to process documents much faster. Some people bearing certain traits were made to skip the line expressly and on further observation, they were conversant with the official language used in this place.

At one point I stood up to complain and they all looked at me like they were doing me a favour to even be there. I got all pissed and strolled down looking for the offices of the managers, only to be faced with biometrics accessible doors. You cannot easily see a manager at NIRA unless they make special arrangements for you. They are locked up and it leaves me wondering whom they are serving.

Eventually, I was attended to and then given a sticker paper with some numbers scribbled upon it. They then told me, “Follow up the details of your application by dialling *216# and when it is ready, pick up the card from the KCCA Central Office.”

I obliged and by December, I had started dialling the code with returned a null result. Come January 2019, I try again on a weekly basis but nothing comes up. This led me to make a complaint in February 2019 which was ignored on Twitter. The contact number they indicate for such queries is never picked up. After months of trying to use the *216# code without success, towards the close of June 2019, I cried out once again on Twitter and this time copied a couple of high ranking officials. To my shock/surprise, a response came through with claims that my ID had been ready since December 2018 !!!!

The tweet I sent which got me my National ID pronto!!

Anyhow, glad that the hurdle had been overcome after an 8 months’ wait, I eventually picked my ID.

During this period of trial, I took time to inform myself more about NIRA’s processes for ID acquisition and to be honest, on paper, they are decent and easy to automate. The question now becomes, why, despite having a proper process design are Ugandans still going through a lot of untold suffering?

These are some of the probable reasons in my view:

1 – Despite the technology at its disposal, the organisation is staffed with analog minded twentieth century personnel who are either overwhelmed or have failed to appreciate the workplace facilities.

2 – Staff recruitment is highly suspect. Based on the alternative official language in this organisation, one is led to believe that it was the result of a village recruitment.

3 – There is an intentional effort by management to detach itself from the customers. Hidden behind biometrics access doors, one has no fall back when they have got a grievance.

4 – There is a network of middlemen that is in big business brokering the processing of IDs for those that want them urgently. A friend of mine got a solicitation of UGX 1.5 Million that he turned down as seen below. He’s still waiting 7 months down the road to get it officially. 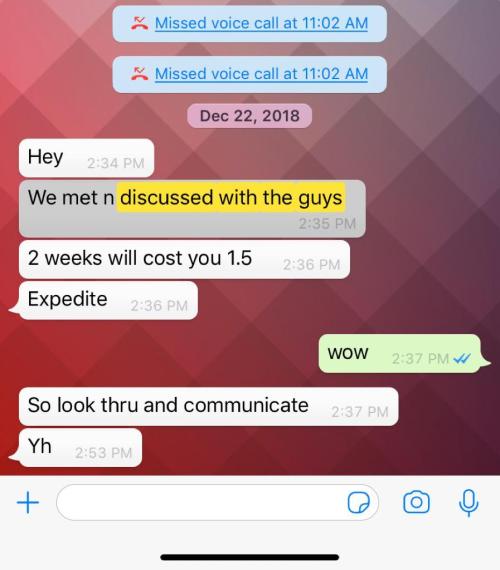 A bribe solicitation for express processing of a National ID. Picture credit – @tmsruge

5 – By propagating artificial delays, the staff are actually creating fertile ground to be bribed in order to process documents expeditiously. I witnessed a fracas where some mothers who were in one of the tents trying to register their children rioted after seeing an endless influx of people who were not lining up going straight to the registration official with already filled papers.

6 – The little effort to interface with the public through the use of the *216# code fell flat on its face because it is simply not operational. Unfortunately, the denials by the technical team are never ending.

7 – The militarization of the operations at the head office is a little overboard. Military personnel in Uganda are not known to have a good understanding of how corporate entities serving the lay man are handled. The few I reached out to while I had problems demonstrated this fact effectively.

8 – The delays are intended. Having lived in Uganda for four decades now, I know too well how people in positions of responsibility create delays in the processes in order to tap bribes from those that have an urgent need for the service.

Well, as an observer and customer of NIRA, after enduring 8 months before getting a replacement ID, I recommend the following to the powers that be:

I do believe that NIRA has the ability to issue new IDs within a Week of applying. They should also be able to issue a replacement ID within 24 hours since in this case all the bio-data is assumed to be within the system and what is left is mere verification as well as printing of the card.

Something needs to be done because the poor service at that institution is going overboard. Many Ugandans are losing opportunities due to delays in acquiring IDs. Time is money and for as long as the folks at NIRA continue doing their work without a sense of urgency, the economy shall suffer in the long run.

James Wire is a Business and Technology Consultant based in Kampala