“I opened up a small DVD burning business in November last year, experienced very good sales in December and early January but thereafter business slumped and each time I tried to find out why, customers simply said they had no money. Its now march and am just beginning to see a change for the better.” In this email, the proprietor was expressing fear for his business thinking that it was bound to fail. After assessing all aspects of his operations, I realised that it wasn’t much about what he was doing wrong but merely the season.

There are always competing forces for the money held by customers. To spend their money on an item or service, opportunity cost sets in. December being virtually a holiday period, the customers were in a better frame of mind to spend on Movies and Music Videos hence the surge in demand for the services. However, as it is typically in Uganda, after spending so much during the festive season which lasts till early January, concern is now shifted to raising school fees for children and other pressing needs like paying house rent and basic survival considering that many are usually broke by this time. Hence if one were told to choose between purchasing a DVD Movie and paying School fees, the latter would obviously take precedence.

It’s always important to know the crests (peaks) and troughs (lows) of your business cycle. Every business has them and they are unavoidable. 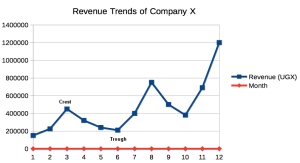 The table below illustrates the Crests and Troughs of some common businesses in Uganda;

Taking the case of Wedding Decoration, most weddings are held in the latter part of the year while the first half of the year is a pretty low season. This could be based on reasons like the difficulty of raising finances in the first quarter of the year since it is a school going season that comes right after the heavy spending of the December Christmas festivities.

The latter part of the year is a more likely period for one to get financial support from friends and family while at the same time conducive for family members based abroad to attend since they can come during the Summer holiday or Christmas break.

As you get into business, it’s important to understand this principle of seasonality in order not to be caught off guard. You may be wondering how these seasons can affect you. These are some of the ways;

However, it is also possible to insulate one against these troughs to a certain extent. You can do so by;

Embrace seasonality and work around the troughs if you are to last in business.

This entry was posted in Business and tagged business, entrepreneurship, sme, Uganda. Bookmark the permalink.

2 responses to “Business has Seasons”